tl;dr — OzBargain has been a male dominant site for the past six years. We are hoping to steer OzBargain towards being a more balanced community with a new design. 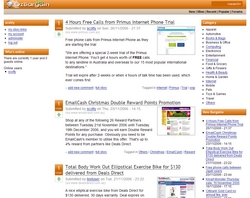 It has been more than six years since OzBargain was launched. Before I soft-launched OzBargain back in November 2006, this blog was where I shared electronic, computer and cheap prepaid mobile SIM bargains. This was an era before iPhones and Android devices. But hey, I am a nerdy guy and I love my gadgets.

After OzBargain was launched, we initially received a wave of visitors from other popular Australian forums, namely Whirlpool and OCAU. In fact Whirlpool remains one of our biggest referrer to this very day, sending 2000+ gadget-loving tech-savvy geeks to OzBargain every 24 hours. Again, mostly nerdy blokes.

The figures speak for themselves. For example, these products probably won’t be all that useful if you are a man. However, looking at the commenters and the voters — most of them  will not be able to use these products. “Female members?! What female members?!” seems to be the running joke on OzBargain, where many express disbelief sarcastically when hinted that there are actually female users on our system.

Our Facebook page statistics seems to agree as well.

Well. It does not look too bad, as there are just a bit shy of twice the males who “like” the OzBargain Facebook page than females. However, when you look at the number of people talking about OzBargain on Facebook, there are actually 3.5 times more young males (18-24yo) than females of the same age bracket (the gen-Y’s).

What does that conclude? OzBargain is dominated by its male members — not just in terms of numbers, but also in its opinions and its voice. I fear the domination here is so strong, that many female visitors do not even bother to sign up, to vote, to share or to join the discussions.

IMHO, it is actually a loss to the community. Personally, I have learnt so many saving money ideas from my wife and some female friends are the most vigorous bargain hunters I know. Without their contribution, OzBargain will continue to be in its little niche of cheap gadgets and making Ainol “that’s what she said” jokes, instead of benefiting the greater Australia.

Something needs to change!

How to make OzBargain more female-friendly?

To continue to grow OzBargain into a more balanced and diversified community, we need to make the site more female-friendly so women will be more willing to sign up and contribute.

Having no idea how to get started, I went to ask the question at SavvySME, a newly launched community website for the business kind. I asked, How to Grow a More Diversified & Balanced Community Website, pointing out OzBargain’s male-dominant nature. I got some vague answers. One said that I need to “find those pockets of people and give them a reason to come to your website”. Yeah right it’s like telling Gerry Harvey to find pockets of people happy to pay high price and bring them to shop at his store — it’s obvious but not very actionable.

Then one day I had a bright new idea while browsing the latest deals on OzBargain (who hasn’t?!). By changing the design of the OzBargain website, it could create an environment that is more female friendly, which in turn would help OzBargain to be a more balanced community! Brilliant! I am an engineer after all who knows nothing about all that marketing fluff. Creating a new design however is at least more doable than “finding pockets of prospects and persuade them to signup”.

After a few days of testing out the new colours, let me now introduce you our new design — Pink. It’s only a start, but here are some of the changes:

I have briefly tested the new design with two female family members and they absolutely adore it!! (those are from my 6yo and 8yo daughters, btw). I have also shown it to my wife and she could not stop laughing which I presume that means she likes it.

That’s not all. More features are planned, gearing towards female members. For example,

Stay tuned! That’s all I want to say. I believe this effort will eventually move OzBargain to a more balanced community, which would be good for everyone.

Any suggestions? Feel free to leave them in the comments.